I would advise those thinking of getting into the youtube video that the output is very loud, especially if you are listening via headphones. Thus it would be best if you turn the volume slide on your computer down quite low, like this:

Posted by News Items Forwarded by Alan Wheatley at 17:17 No comments:

On Wednesday, Oct 21, “a majority of MPs [including Herefordshire’s MPs] voted against [the ‘sticking plaster’ of] directly funding free school meals over the school holidays until Easter 2021,”(1) and yet on Wednesday, Oct 14, the Express had written, “Benefits are important to millions of people right across the country. However, the Department for Work and Pensions (DWP) is set to take action which could mean the bank accounts and social media of claimants are monitored” (2).

All very convenient at this time for a vindictive government that penalises poor people while such monitoring goes against the General Data Protection Register (an EU regulation) and non-declaration of income can be regarded as a claimant’s DIY ‘sticking plaster’ in desperate times. I offer the following timeline to outline what neoliberal government does not want us to know.

In November 2006, welfare rights adviser Neil Bateman reported on the impact of 21m phone calls (44% of all incoming calls to Jobcentre Plus helplines) going unanswered in 2004-5 (“Delays in processing claims and changes of circumstances – six weeks is common – leaving people destitute….”);(3) and in May 2007 of a rise in charities providing food to poor families [under Tony ‘Tea with Margaret Thatcher’ Blair’s government].(4)

In October 2007, David Cameron as Leader of the Opposition ignored the destitution caused by Jobcentre Plus failings and declared that ‘tougher sanctions’ against benefit claimants’ would help create a fairer economy.(5)

“Sanctions undermine physical and mental health, cause hardship for family and friends, damage relationships, create homelessness and drive people to Food Banks and payday lenders, and to crime. They also often make it harder to look for work. Taking these negatives into account, they cannot be justified.

“Benefit sanctions are an amateurish, secret penal system which is more severe than the mainstream judicial system, but lacks its safeguards. It is time for everyone concerned for the rights of the citizen to demand their abolition.”(6)

Now, Charlie Spring in the November-December 2020 issue of New Internationalist magazine reports: “[T]he UK has long seen patchworked food assistance, especially within faith communities. But foodbank provision rose steeply following the recession of 2008 and the austerity that followed. In 2011 major food-aid network The Trussel Trust reported nearly 130,000 instances of people receiving food. By 2015 this had jumped to 1.1 million and by March 2020, the annual figure sat at 1.9 million.”(7)

What will News Forwards from Alan Wheatley readers do about these injustices? What drove Florence Nightingale to accomplish what she did? She answered quite simply, “Rage.”(8)

Driven by rage and love

Posted by News Items Forwarded by Alan Wheatley at 12:15 No comments:

Daily Mirror reports that a Lancashire shop has banned the local Tory MP after he voted against free school meals, while Yorkshire Live reports that Rishi Sunak and all Tory MPs have been banned from a North Yorkshire pub for the same stance against poor families.(1)(2)
What actions will Hereford Times readers take against Herefordshire MPs Jesse Norman and Bill Wiggin for also helping defeat the extension of free school meals, particularly as Jesse Norman is First Secretary of the Treasury and Bill Wiggin has links with offshore finance?(3)
In 2017, Bill Wiggin responded to "a front page story in the Hereford Times outlining his position as managing director of an offshore financial company by stating that the article was 'not news'."(3)
As the Daily Mirror and YorkshireLive stories emphasise, constituents can help to make the news, whereas my experience of Jesse Norman MP is that he tends to 'note' my views while voting against them, and the top-ups to Bill Wiggin's basic MP salary could pay for several school meals.
Alan Wheatley
Hereford
Notes
1. https://uk.search.yahoo.com/search?p=tory+mp+banned+for+life+free+school+meals&fr=uh3_news_web_gs&fr2=p%3Anews%2Cm%3Asb
2. https://www.theyworkforyou.com/divisions/pw-2020-10-21-154-commons
3. https://www.herefordtimes.com/news/15711401.mp-bill-wiggin-responds-to-criticism-over-off-shore-interests/

Posted by News Items Forwarded by Alan Wheatley at 15:12 No comments:

The truth about Zane Gbangbola

Guest blog post, by Nigel Gilbert of Betrayed By Their [NHS] Trust 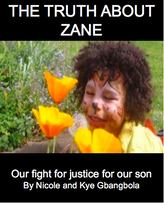 Ingra and I joined over 200 other people last night in a Zoom meeting organised by the parents of the late Zane Gbangbola, who would have been 14 yesterday had he lived..
Zane died due to flood water entering the basement of the family home by the Thames in early 2014 and releasing Hydrogen Cyanide. Since then the bereaved parents have been compelled to fight a campaign to obtain the truth from a corrupt establishment of many agencies which stand shoulder to shoulder denying justice to them.
The basic facts are that the fire services detected Hydrogen Cyanide at the home. Matt Wrack leader of the Fire Brigades Union spoke last night to confirm this. Yet right from the start there was denial. It was claimed that the death was caused by Carbon Monoxide caused by a faulty generator in the house. No such generator was running. It was denied that there was ever a landfill site behind the house. The inquest ruled accidental death caused by Carbon Monoxide poisoning.
Since then it has been established that there was a landfill site perfectly well known to the authorities, who allowed houses to be built. It was even recognised four years before Zane's death that it posed a threat to life. But the only reaction of the authorities was to provide gas protection to their own properties.
At the inquest Zane's parents faced a phalanx of lawyers, but they themselves were denied legal aid.
Professor Phil Scraton, who was involved in the Hillsboro inquiry and wrote a book on it, drew parallels with the corrupt response to that disaster. Multiple agencies denied the truth.
The meeting last night called for an inquiry panel with full disclosure. Damningly this inquiry must be independent of the state and need look at documents only. This implies the abject corruption of the state.
Those of us involved in BBTT will be unsurprised by any of this. We are used to the denials of multiple agencies, the corruption of inquests etc.
The Labour Party is very supportive. Richard Burgon and David Lammy spoke last night. Starmer and Burnham have also been supportive. But you will recall that justice for Zane was specified in Corbyn's manifesto. His successors will get the credit but I wonder whether they will attend to the issue of widespread corruption or just treat the case as a one-off.
The campaign has a website.
Nigel

Posted by News Items Forwarded by Alan Wheatley at 18:19 No comments:

To: Gavin Williamson, Secretary of State for Education

Reverse the cuts to union learning

The government's plans to cut the Union Learning Fund in England means hundreds of thousands of workers will miss out on skills and training.

Sign the petition calling on the government to reverse cuts to union learning and ensure working people can access education and skills training.

Posted by News Items Forwarded by Alan Wheatley at 17:05 No comments:

I have just submitted the following Planning Objection re Planning Application to build at Three Elms (P162920) to https://www.herefordshire.gov.uk/xfp/form/285?id=P162920/F&linkid=162920

The prospective car-dependency impact of this development would worsen Herefordshire Council's prospects for carbon neutrality by 2030, and in day time this is currently a great area for walking in in daytime that I frequently encounter in walking from Belmont to Grandstand Road Co-op, Bobblestock.

The prospective car-dependency impact of this development would worsen Herefordshire Council's prospects for carbon neutrality by 2030, and in day time this is currently a great area for walking in in that I frequently encounter in walking from Belmont to Grandstand Road Co-op, Bobblestock. This currently allows pedestrians ability to use road as an extension of pavement for 'social distancing', but burgeoning car-dependency in that area would worsen realities for existing locals.

Further, the inclusion of a community centre in the revised proposals are devoid of viability. Lockdown realities restrict accesss to community centres, and worsen residents' experience of being 'caged in' in living spaces that have got progressively smaller over the past century as developers and planners operate on the basis that THEY THEMSELVES will never have to live in the spaces that they design.

Overcrowding only increases their profits and social inequalities, their aloofness. Lockdown has led at least one community centre to file for bankruptcy due to lost booking revenues, as I wrote recently in Hereford Times published letter, citing Kingsgate Community Association, London NW6.

Developers' detachment from local realities also reflects on the poor targeting of the site in terms of hydro-geology. So I urge the planning regulators to say a resounding NO to the developers' proposals for what could not really be called 'homes'. As land owners, perhaps the Church Commissioners concerned are more like the money lenders Christ threw out of the temple than they are followers of His doctrines?

Posted by News Items Forwarded by Alan Wheatley at 15:42 No comments:

Pageviews from the past week

News Items Forwarded by Alan Wheatley
Alan Wheatley's own blog went online on Thursday, 8 August 2019 and is the responsibility and a platform for Alan Wheatley of Hereford to share insights with an online public. A spin off is the 'Alison Mann's Yoga Herefordshire Weekly Class Schedule', helping support Alison in her mission.

This blog as an extension of its publisher

A few days before starting this blog I retired from editing the Kilburn Unemployed Workers Group blog. There, I developed blogging skills within the constraints of group identity.

Now this is my personal online platform while I am an Herefordian on the most basic of State Pension, and opposed to, say, the 'financial services industry' whose paid advertising on TV subverts the will of the 'chattering classes' toward co-operating with 'the wholesale demolition of the welfare state'.
In addition to this blog being a platform for my 'speaking out', it can also serve as an experimental platform for modes of 'speaking out', as with digital online animations.
I identify myself as a person of Myers-Briggs Type Indicator (MBTI) INFP (Introverted iNtuitive Feeling Perceiving) classification, as outlined in the book, Do What You Are: Discover the perfect career for you based on the secrets of personality type. I understand from that 'still waters run deep' insight, that project work such as on a blog is the best way for me to develop as a lifelong learner and maybe even to increase my earning capacities against the backdrop of using State Pension entitlement as an Unconditional Basic Income.